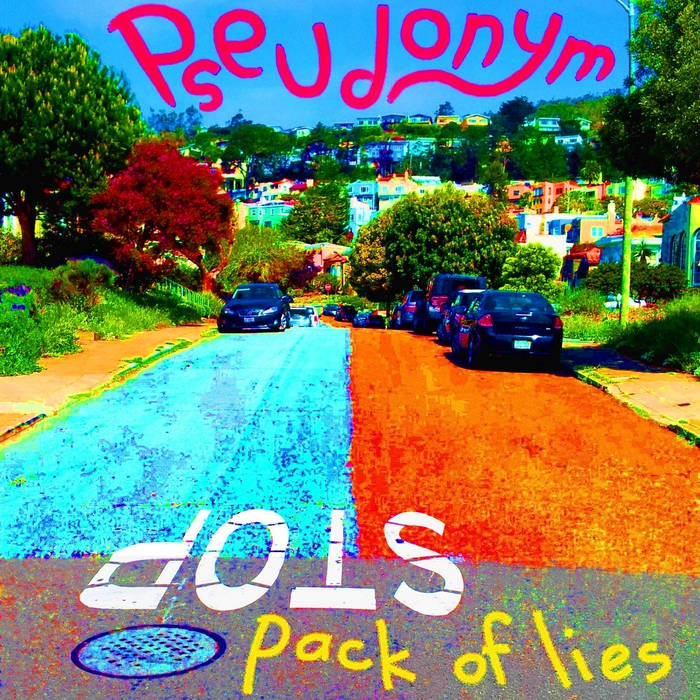 Pack of Lies is also available on CD -- here: ow.ly/iaFi30gXQcQ

Here's what they said about our last album, Revolving Door:

"A truly great album ... that you like a lot on the first spin, and that you come to love with each subsequent spin ... magical ... amazing ... magnificent ... stunning."
- Indie Rock Cafe

Secondly, you're probably wondering why I (Waylan) am writing the album notes. I'm sure that's what you're thinking. Well the answer is, we took a vote. Paul and Cliff were not eligible because they'd already written previous album notes. Term limits. So it was between me, Gil, and the Doctor. And I'm pleased to report that I won in a landslide with 60% of the vote (3 votes)! Whoever else voted for me (Paul and Cliff I assume) probably felt sorry for me. I had sort of a rough year.

Things started going downhill last March when my girlfriend broke up with me. I didn't see it coming. Sure, yes, in hindsight the signs were there, but I must have been in denial because after 6 years together I thought we were pretty locked in. She said it wasn't me, it was us – we weren't meant to be together THIS way. Gee, good to know. Anyway I was pretty down for a while after that. I started questioning everything. I thought there's got to be more to life than this ridiculous revolving door of relationships, more to life than playing stupid insipid trivial pop songs in an obscure rock band. (Nothing against Paul's insipid pop songs, I mean they're perfectly OK, but that's how I was feeling at the time.)

I wanted to do something meaningful, to make a difference, to leave my mark on the world. Well, right around that time I happened to read about this group in the Netherlands that was planning a one-way mission to colonize Mars, and I realized THAT'S what I was going to do! I figured I'd be the perfect "astronaut pioneer". I'm creative, adaptable, good with my hands, and I didn't really have many ties keeping me here on planet Earth.

I got so excited about the idea that I started selling my "earthly" possessions on Craigslist, including my music stuff – guitars, amp, pedals – plus some furniture and clothes. You're probably thinking this might not have been the smartest of first moves. Looking back, I'm sure it was my way of symbolically breaking away from the monotony of my mediocre life. But at that point I was just thinking "I won't be needing this stuff on Mars."

I soon found out, however, that the Mars program wasn't taking any new applicants. Supposedly they already had too many. I got kind of desperate – I really believed they would take me if I had a chance to prove myself. So I used the money I made from selling my stuff to buy a plane ticket to the Netherlands.

I flew into Amsterdam, rented a car, and drove to the address of the Mars program which is in a suburb about 45 minutes from the airport. Turns out, it's just some guy's house. I rang the bell. No answer. As I was standing around out front wondering what I was supposed to do next, a neighbor walked over and asked me (in English) if I was looking for the Mars project guy. He asked if I was a reporter, and I went along with it. I said yes, I was doing an article for the San Francisco Mars Monthly. He was impressed. He told me the Mars guy wasn't home but he gave me directions to the actual Mars program office. I thanked him, took his picture, wrote his name down and told him I'd try to get him into my article.

When I got to the office address, I thought now this is more like it. The building was modern with big shiny glass, and inside there was a nice lobby and a reception desk, and a couple of young, bored looking security guys in tan uniforms. I walked up to them and said "hi! I'm Hans Reinsdorf with the San Francisco Mars Monthly. I'm here to do an article on the Mars mission. They're expecting me." I noticed that A) it was fun pretending to be a reporter, and B) I was just assuming at this point that everyone spoke English. Well, both of these guys did. They had me sign the guest book and told me which floor to go to. I took out my phone to take their picture (for the article) but they said "no photos". Of course. I'm sure NASA doesn't let you take pictures at their office either.

Stepping off the elevator I would have expected to see a sign for the Mars program. Or a receptionist. Or any people. But the only sign of life was a cleaning lady pushing a trash barrel around. I asked her where the Mars group was. She didn't speak much English but she knew the word Mars, and she pointed me to an open area with rows of work tables. So I sat down at one of the tables and waited.

I guess I was pretty tired from my trip because the next thing I knew I was waking up, my drooling face flat on the table. The office lights were off now and it was dark outside. Needless to say, there were no Mars employees anywhere in sight. I stumbled over to the elevators and pushed the button but nothing happened, so I followed the exit signs and opened the door to a stairway. A loud alarm went off. Great. I made my way down to the lobby where the alarm was even louder, and lights were flashing. I tried pushing open the front door but it was locked. Great. And outside, what should I see but a Netherlands cop car pulling up, lights flashing. Wonderful.

Two cops got out, unlocked the door, led me out by the arm, and pushed me toward the police car. I tried to explain I was just a reporter doing a story on the Mars mission. I offered to take their picture, but the cops weren't interested. They searched my backpack and spoke a bunch of Dutch and put me in the back of the car.

Netherlands prisons are pretty nice actually. At least the one they took me to. It had a library, and classrooms, and the prison cells had carpeting and were painted cheerful colors. It was nicer than my college dorm. They sat me in a room with a guy who did speak English, and he explained that there had been a wave of thefts at the office complex recently and they assumed I was robbing the place. But they hadn't found anything stolen on my person. That was good, he explained.

"What were you doing there, Mr. Solo?" Oh right, they knew who I was. I said I had just arrived from the USA to join the Mars mission and that I had fallen asleep in the office. I said the Mars mission people could vouch for me. He asked for a name. I made something up. "Bjorn is the guy's name who I was working with".

"We'll check with them in the morning" he said. I was to be detained overnight. This was OK with me since I hadn't had a chance to find a hostel or a motel yet, plus with any luck the cops would now be arranging my first meeting with someone from the Mars team!

And the next morning this boss guy from the Mars project did show up. They brought him to my cell and introduced him, I think his name was Lars. He didn't seem to be in a very good mood. "Who the hell are you?" he asked. I sort of stammered out my name, and said I was from San Francisco, and that I was here to join the Mars program. I started talking as fast as I could – I wanted to get everything in – I told him how great I would be at this astronaut business, how my girlfriend had left me and how that had made me see my true mission in life and how there was nothing tying me back to Earth and... and Lars cut me off. Lars started yelling at me. "Who do you think you are!? You don't just run away and join a space program to escape your problems with women!" And other things to that effect. I was starting to realize I would not be getting to Mars anytime soon.

Well, long story short, Lars agreed not to press charges, the police released me after a short lecture on trespassing, I went straight to the airport and got on the earliest flight back to San Francisco.

Luckily, something in the back of my mind had prevented me from quitting my job or quitting the band. I had only been away for three days, so I made some excuses for whatever I had missed and just slipped back into my previous life, which didn't seem quite so mediocre anymore. Sure, I had to borrow a guitar from Paul for a while because I had stupidly sold mine, but I was definitely coming around to thinking that maybe making music wasn't quite so pointless. And shortly after I got back, the band started recording this album. And here it is.

Um, which reminds me, I was supposed to say some stuff about the album. Well, we like it, and hope you do too!

Pseudonym is a band consisting of me, Paul Desjarlais, and other real or imaginary people. Back in Boston a long time ago I used to play bass for The Uncalled Four, and then for Haberland. After that I released a cassette album called Pabz, and later a CD called Pig Tail World. Now I live in San Francisco and I record songs when I get a chance and sometimes post albums online. ... more

Bandcamp Daily  your guide to the world of Bandcamp